A PiP (picture-in-picture) effect allows you to insert an image, video or object onto an existing image or video clip in your video, effectively overlaying a picture-in-picture within the existing clip. You can modify the degree of transparency of the overlapping clip, as well as its position, motion and other properties using the PiP Designer*. 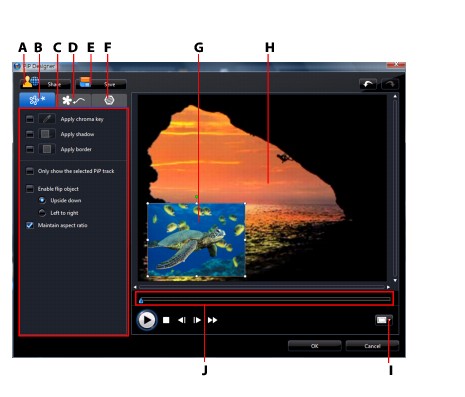 To open the PiP Designer:

You can change the size, position and orientation of the media clip or object in a PiP effect. Resizing options are unrestricted. You can reduce the clip to miniature size or enlarge it to completely obscure the underlying media file.

To modify its size, position or orientation:

Within the PiP effect properties tab, you can:

Within the PiP motion tab you can add motion* to a PiP effect, allowing it to move across the screen. You can choose from a number of predefined motions or create your own custom PiP motion. You can also set the transparency level of the PiP effect, rotate the effect, and add a fade-in or fade-out effect.

The PiP Designer uses keyframes to customize the motion on a PiP effect (and transparency if required). Keyframes are frames of your video that define the
start and end points of an effect, which in this example is motion or transparency.

To customize the motion of a PiP effect:

Duration of the PiP clip in the timeline

The longer the PiP clip, the slower the PiP object’s motion will be. For example, if the PiP clip is 10 seconds, it will take the PiP effect 10 seconds to complete the applied motion.

To customize the rotation of a PiP effect, enter in the degree of rotation in the Rotation settings section you want the PiP to rotate in the available box, then choose whether:

Once you finish modifying your PiP template you can save it to the PiP Objects Library for future use or upload it to DirectorZone to share it with others.